Great video to discuss with your crew from a burn done for the Anacortes Fire Department.

I think a good way to break down drills for an engine company is to break down characteristics of on plane, above and below grade fires and then keep the focus of the drill on a few things. In this video, it is an upper-level fire being advanced upon by this crew from below in the stairwell. Here are some things I have found that are worth discussing in quick drills around the kitchen table that help keep tactical discussions from devolving into opinion/confirmation bias.

1: Fire behavior characteristics. In an upper-level fire in a residence, upper floor fires are often clear up to that level that the fire is on. It is important to anticipate this fire behavior for a couple of reasons. First, you are in a great position in these fires to dry stretch to the stairwell as lower floors are clear. This can often shave precious time for us, especially in understaffed crews. The one caveat is that if there is ANY smoke on the first floor, for example, the dry stretch becomes very unlikely. Another reason it is important to have an anticipated picture of the fire behavior characteristics of upper floor fires would be that if and when you do find smoke on the ground floor, you should have alarm bells going off. Did it start in the basement and work up? Was it a fire on the ground level that traveled? Or one of the most common, was it an exterior start like a back deck fire that has worked up and into the building? Getting that read wrong and heading up the stairwell dry can and has spelled disaster for many companies throughout the years. You can have an extremely well involved top floor and will likely have clear conditions on the approach up to the last few steps. Coming up from underneath should be fairly easy as long as that is indeed where the fire is.

2: What is the exposure problem? Obviously here you can watch the fire develop in the common space outside of the room of origin, so you can have some great conversations with crews here about how the interior space outside of the room of origin is deteriorating rapidly. The big problem outside of the seat is the enormous amount of gas/gas flame accumulation in the common area and the room directly across from the seat. From a victim survivability standpoint, things are going south fast and we HAVE to get to them quickly. You can see the wall opposite of the seat take a beating for a few seconds before it starts burning and lights off the gas flame above the staircase. We are moving rapidly from pure convective currents being the driving force to now convective AND radiant/line of sight energy together insulting and degrading survivability and aiding in the spread. Once the fire takes the common space (is now uncompartmentalized) spread rate will start increasing quickly. Also working against the victims often times will be reduced ceiling heights that will allow very fast spread and will drastically affect victims because of the reduced cubic area and ventilation profiles. Although things can get bad for victims quickly up there, do not think for a second that spaces do not exist for people.

3: What is the fire attack plan? Once we confirm it is a fire that started and is working on the upper floor and knowing we will likely be able to stretch quickly to the inside stairwell, we need to get on our horse and go. This is a great video to show the space outside of the room and the beating the common space is taking. You can see that a fire attack that starts from the exterior on this fire when no delay is present (staffing etc.) would do very little if anything to affect the spread into the common area or adjacent rooms. The best hope is to attack from the protection of the stairwell so that the ENTIRE fire area can be covered by the nozzle, driving heat and smoke to the outside of the building, confining the fire and putting firefighters IN THE SPACES where the victims are taking the beating. The convective currents are not affecting the stairwell, only the radiant line of sight. We have the solution to that problem though that erases line of sight energy in an instant and that is an open nozzle.

4: How does the nozzle work this fire? You can see this nozzleman do a great job of starting high overhead and working the common area first before going to the fire room. Often times on these types of fires all you can see is fire overhead from the stairs. It can be difficult to tell which room or rooms the fire is coming from, so as you work the ceiling above your head, pay attention to where the glow is returning from. The fire rooms will keep burning until the stream is inside them, so as the fire disappears overhead, the rooms will reveal themselves so that you know your path of travel you need to take once the top is reached. Building construction identification can also help, like knowing if you are on stairs that are against an exterior wall or if they are in the center of the building.

Spend a few seconds in the stairs letting the water work about above and do not be too eager to move up too quickly. Half stories especially will remain VERY hot so a nice, slow push up will do you well. Once the top is reached, pause and ensure the common area is cooled and then direct the stream into the room or rooms of fire. The same principle applies though, take a hot second to allow the water to work in those rooms as you seal them off with your stream before starting to move forward again. Remember always that you are likely moving twice as fast as you think. Slower pushes remove more heat and hit more surfaces. Lastly, when you get the knockdown you need, hydraulic ventilation is an absolute must. The nozzleman should be ventilation minded upon extinguishing here to improve conditions quickly, and the second person on the line should not hesitate to search as soon as humanly possible. The stairwell will limit search crews’ abilities to search while the fire attack is happening, so often times the nozzle crew is the first crew to be in the space with the victims. The location and removal/isolation of the victims is CRITICAL. Look at how fast things get better here with a slow fire attack and rapid hydraulic ventilation.

Hopefully, your crews find some use out of the video, and a job well done by Ian Bennett, Jesse Ireland and Michael Gustafson putting on the burns here. 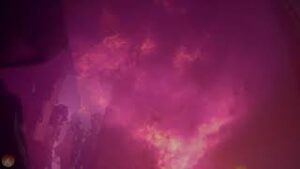